by The Outside Agency & Fracture 4 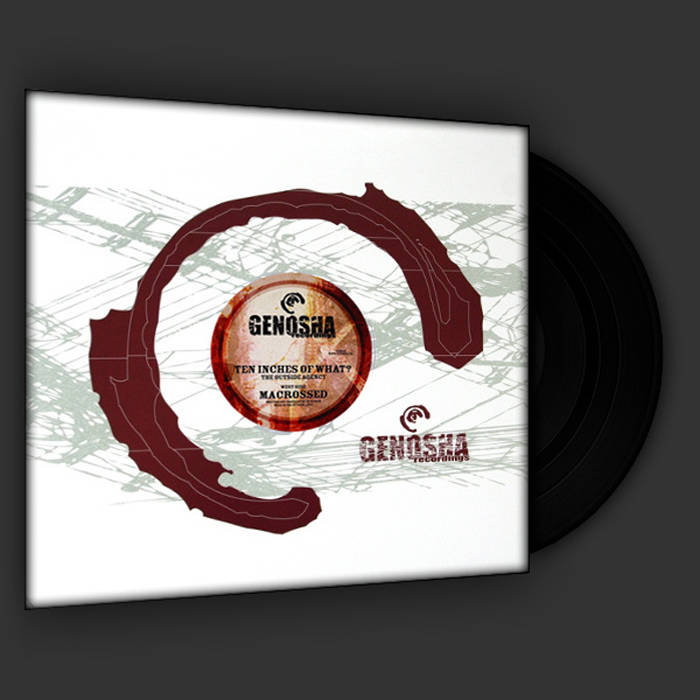 10 was definitely going to be a 10”. And it was definitely going to run inside out. We had known that that was what we wanted since we toyed with the ideas for 7. This one was also going to have locked grooves that didn’t suck and run inside out. Now, I had been bitching for Macrossed to come out since the very first beginnings of Genosha so I was very happy it was finally coming out. (The track is really that old.) It was perfect for a 10” release due to its length.

I was going to let Hidden handle this one solo again because times were still turbulent for me and I felt that I still owed him this after doing 7 solo. He insisted that I contribute anyway because he didn’t want to deal with people asking him if I had fallen off or retired all the time. The only thing I had lying around at that time was Manhunt, which I’d started with Stef while in Scotland. We actually intended to put that on an all-collaborations EP, but decided it would contrast nicely with Macrossed. (Collaborations EP is still in the works.) Manhunt wasn’t finished yet, but Hidden put the screws to me and made me get off my ass and deal with it. The kick in Manhunt is actually the kick from Dirty (Genosha 1) extremely distorted. Try it out for yourselves or save you some work and simply sample it straight from Genosha 10 itself (or the upcoming CD for a cleaner copy). There is no shame in this; others have already sampled it. The kick works really well in angry hardcore tracks. We don’t mind, but remember… we can always tell.

The artwork for this release was also a nice chance to deviate from our standard artwork. The artwork rules, don’t you think. Come, on… It’s robots and gangsters, man… What’s not to like?

Written and produced by Eye-D, S. Cairns and DJ Hidden